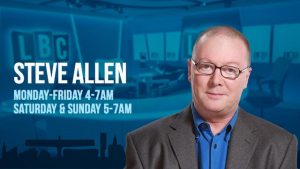 This week’s Broadcast Bulletin from Ofcom is a bumper one: 132 pages in total, and although the Jimmy Carr decision (on which more later) grabbed the headlines, many of the others are worthy of comment – not least that involving LBC’s ‘shock jock’ presenter and friend of the London cabbie in the wee hours of the morning, Steve Allen (pictured). There was a story in ‘The Times’ about a blind man who had a fear of dogs and therefore decided to have a Guide Horse (a miniature one about 3 feet high) rather than a traditional Guide Dog. Cue for Allen to start one of his early morning monologue riffs for a minute or so about how stupid and ludicrous this was: “Well if he’s blind, tell him it’s a rabbit or something…. I’ve never heard of anything so stupid. This is the blind man scared of dogs hoping that a horse will guide him on his commute. Where are you going to take that for goodness sake? You can’t take it on the train, can you?”

One listener complained that Allen’s comments discriminated against blind people. Ofcom, with a unsmiling po-face, recited the Equality Act and found the comments had the potential to offend and were not justified by the context (breach of Rule 2.3). Fair enough you might think. What was slightly worrying however was how the decision ended: Ofcom’s warned LBC that it faced a sanction if Steve Allen did anything similar in future because of three previous Code breaches when he had “referred to different communities in highly offensive terms.” The most recent of these breaches was recorded in April 2018, and the targets of his previous comments varied from the traveller community, to the Portuguese in general, to the courts for not imposing sufficiently strong punishments (since when were the courts a community by the way?) I am not personally a fan of Steve Allen’s style of broadcasting or many of his views, but I do welcome the fact that a voice like his is available on British radio to those who wish to listen, and worry that a warning of sanction like that from Ofcom is disproportionate and will have a chilling effect.

This chilling effect may potentially be increased further by the Jimmy Carr decision. 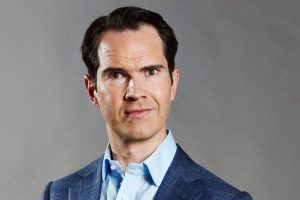 Here Ofcom found that Comedy Central breached Rule 2.3 by including in a trailer shown at 6.25pm for its Roast Battle show Carr jousting with guest comic Tom Rosenthal by asking Rosenthal (whose paternal grandparents were Jewish, but he is non-practising) if he is Jewish. Rosenthal replies that he is not and Carr quipped in reply, “Someone needs to tell your face.” Rosenthal was shown laughing while holding his nose. Ofcom found the comment was potentially offensive and not justified by the context, referring to traditional anti-semitic tropes of big noses and the rise in reported anti-semitic incidents in Europe to support its decision. The reasoning also relies heavily on the fact that this comment was shown in a trailer (where a viewer comes on items unawares) rather than in a programme. Understandably, and rightly, the decision does not comment on whether the Carr/Rosenthal interchange breached the Code when shown in the programme itself – whether shown before or after the watershed.

But as it stands I fear this decision will also have a chilling effect. To play safe, Paramount UK may well decide that if Ofcom determines a comment is anti-semitic and should not be broadcast in a trailer, Ofcom will regards it as anti-semitic and almost impossible to justify full-stop, and should not be broadcast in any comedy programme either – at any time. That would be unfortunate in my view. Comedy programmes would be the poorer for it.

The message from Ofcom seems inescapably to be: if in doubt about transmitting comments which might cause offence to various communities, a broadcaster would be wise to play safe and self-censor. And if you take risks, and get it wrong a view a few times, we will threaten to sanction you. Does this approach value the right to freedom of expression enough? Not in my view.