The Importance of Controlling Star Presenters

Ofcom’s latest Broadcast Bulletin (25 September 2018) offers a timely reminder to broadcasters about the need to stop star presenters turning into crusaders on air and ignoring the need to be duly impartial and fair. The first case involved Eamonn Holmes and Ruth Langsford (pictured) in their Channel 5 consumer entertainment show, Do the Right Thing With Eamonn and Ruth, broadcast on 29 March 2018. The programme contained items about non-controversial topics like a skateboarding dog. But there was also one about the hotly disputed issue of electronic collars for dogs and cats and whether they should be banned.

The presenters took sides in the debate from the very beginning when Holmes said: “Should pet shock collars be banned? We think so”. The programme proceeded to make a completely one-sided case for their prohibition, ending with a reporter commenting that “The Dogs Trust tells us that they are appalled that it’s still legal to buy and use electric shock collars in England”, and Eamonn speaking directly to camera, “If you agree with the Dogs Trust, lobby your MP. All the details are on the screen and on our website right now. We hope by telling this story that anyone who is using an electric shock dog collar or cat collar will think again and hopefully chose other ways of training their pets”.

Rule 5.5 requires due impartiality on “matters relating to current public policy”, and 5.8 that any personal interest of a presenter that would call the impartiality of a programme into question must be made clear to the audience.  Channel 5 failed on both counts. Not only was this programme broadcast during the period that the Department for Environment, Food and Rural Affairs  was consulting on proposals to ban the use of e-collars in England, but the issue has been widely debated in the media and public policy forums as Ofcom demonstrated.

Channel 5’s woes did not end there. It turned out that both Holmes and Langsford are patrons of the Dogs Trust. This was not mentioned at all to viewers. So Rule 5.8 was breached as well as Rule 5.5. Broadcasters must make their presenters and reporters aware of this rule, because it is they who are in the best position to know what personal interests they have which might cause problems when they appear on air and so can tell the producers. 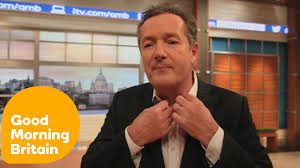 Another star presenter to fall foul of Ofcom’s Code was Piers Morgan on ITV’s Good Morning Britain of 22 January 2018. Never one to shirk from taking a crusading position on a story to stoke up viewers’ interest, Morgan made no exception when the programme covered the topic of an SAS veteran who was homeless because the local Herefordshire County Council was not providing him with accomodation. The Sun newspaper had started a petition in support of the homeless man, Bob Curry.

Morgan’s crusading tone was reflected in this exchange with Curry, who said that but for support from his Regimental Association, he would be sleeping on a park bench. To which Morgan responded: “It’s absolutely disgusting, it’s disgusting.”

It turned out that the programme had asked the Council for a comment to explain their position (eg they held no housing stock). But Morgan  refused to read out the Council’s statement in the 22 January 2018 programme. As a result, understandably, Ofcom found this show was unfair to the Council and breached Section Seven of the Code.  In the next morning’s show however the Council’s position was reflected and there was no Code breach here.

The message is clear: however influential presenters and reporters are, and however strongly they feel about a particular story, their coverage must remain duly impartial and fair.